A Person God Has Prepared To Hear The Gospel

A woman who invited Robert Gribble into her neighborhood becomes the first to enjoy the blessing of the Lord in regard to his visit demonstrating Matthew 10:13.

Following excerpt from 60% into Recollections of an Evangelist by Robert Gribble
About the close of the summer a woman, who had heard of the entrance of the gospel into Coleford, sent a request that it might he brought into her neighbourhood, and offered her cottage for ministry. She was a tenant of the farmer just mentioned, and lived about a mile from his house. This application seemed to come as from the Lord, and her desire was granted. I first went there on a stormy evening in October, and after passing over seven miles of rough and hilly road, came to two cottages, no others being within some distance. Everything to outward appearance was bleak and cheerless, but the sight of about forty persons gathered in such a place, and in such weather, to hear the word of life, greatly cheered me, and seemed indicative of future blessing. There was no church or other place for public worship within two or three miles, and the inhabitants generally were totally ignorant and depraved. Here, as at Coleford, the person who received the gospel into her house, was the first to realise its power in her own soul. (These are only some of the many instances in which the truth has been blessed to those who willingly opened their houses for the ministry of the word. I have always been unwilling to go where rent was expected for such a purpose. “If the house be worthy, let your peace come upon it, but if it be not worthy, let your peace return to you.” Mat, 10:13.) 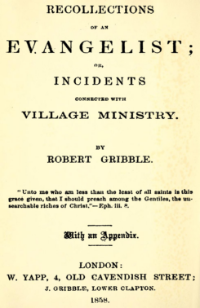 Holy Spirit convicts people of their sin
A man who came to mock the sacred things of God was convicted by God. He converted the next day.
A person God has prepared to hear the Gospel
A woman who invited Robert Gribble into her neighborhood becomes the first to enjoy the blessing of the Lord in regard to his visit demonstrating Matthew 10:13.
Communities of new believers formed by the Gospel
A man who had been "thoroughly immersed in sporting, and other worldly amusements" received the Lord and became a preacher. This was the result of the tireless confidence of his sister who was the only Christian in the whole community for a period; eventually, numerous people in the community converted and a church was erected.
Large groups of people converted at the same time
Robert Gribble was moved to change his residence, he obeyed and was led to a village that had a great need for the gospel. He reached the unreached with the Gospel of Christ, by the end of his seven years' stay, he had introduced the gospel to five different places and between eighty to hundred people had converted.