Disciples Are Devoted To Christ Above Anything Or Anyone

The Goforth's eighteen month old was very sick, and all attempts to save the toddler from dysentery seemed futile. Death, it seemed, was imminent. But as both parents knelt down to commit the little boy's soul to his Maker, the totally unexpected happened.

During our fourth year in China, when we were spending the hot season at the coast, our little son, eighteen months old, was taken very ill with dysentery. After several days' fight for the child's life came the realization, one evening, that the angel of death was at hand.

My whole soul rebelled; I actually seemed to hate God; I could see nothing but cruel injustice in it all; and the child seemed to be fast going. My husband and I knelt down beside the little one's bedside, and he pleaded earnestly with me to yield my will and my child to God. After a long and bitter struggle God gained the victory, and I told my husband I would give my child to the Lord. Then my husband prayed, committing the precious soul into the Lord's keeping.

While he was praying I noticed that the rapid, hard breathing of the child had ceased. Thinking my darling was gone, I hastened for a light, for it was dark; but on examining the child's face I found that he had sunk into a deep, sound, natural sleep, which lasted most of the night. The following day he was practically well of the dysentery.

To me it has always seemed that the Lord tested me to almost the last moment; then, when I yielded my dearest treasure to him and put my Lord first, he gave back the child.

How I Know God Answers Prayer 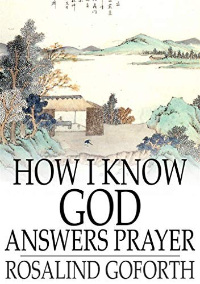 Don't be anxious for what to eat or wear
Rosalind Goforth determines to go to church, going back on an earlier decision to not go for the lack of suitable clothing, after she stumbles on this portion of scripture: "Why take ye thought for raiment . . . seek ye first the kingdom of God, and all these things shall be added unto you." The very next day, a box with not only new clothes arrived for her.
God communicating in a dream
Wang Feng-ao was a proud, overbearing Confucian who despised Christianity so much so that he beat his wife each time she listened to or visited missionaries. But all that changed and a new man was born, when God used a dream to awaken his conscience.
Timely prayer for someone far away
One day, after about a year of struggling almost in vain to learn Chinese, Mr. Goforth found an unusual help and communicated effectively to the locals. Two months later, he learnt that on that very day, students at Knox College in far away America, met specially to pray for him.
Disciples are devoted to Christ above anything or anyone
The Goforth's eighteen month old was very sick, and all attempts to save the toddler from dysentery seemed futile. Death, it seemed, was imminent. But as both parents knelt down to commit the little boy's soul to his Maker, the totally unexpected happened.
God answers prayer
Rosalind Goforth and her kids were trying to flee China in the wake of a Boxer crisis, asides what they had on their bodies; they had no other clothes for the long voyage home. Rosalind took to her knees and cried out to God; twice she prayed, and twice, God answered her prayers most amazingly.