Mimosa's four boys all fell ill when measles struck India. Mimosa chose to trust God alone, turning down all entreaties to abandon her faith and return to idol worship in a bid to save her children. Her faith was not in vain, as God stepped in to heal her children.

Following excerpt from 57% into Mimosa by Amy Carmichael

. . . . Then measles came to the village, and measles is to India what smallpox is to England. All four boys sickened, her jewel child nearly died, and the baby boy lay in her arms a little bundle of bones.

. . . . She had not money to buy the remedies prescribed by the barber who doctored the village, and, what was much more serious, could not buy the extra nourishment required by the poor little fellows to fortify them to fight their illness, and they got weaker and weaker. Kept at home as she was now, she had even less money than usual.

The temptation to give up the faith that seemed to have failed and to resort to the ways of those about her must have been tremendous through those weeks. There were the demons of disease to be appeased, and that vindictive god of ill-luck. “Only a cocoanut and a few flowers! Was it much to give to win health again for the poor sick children?” said the voices around her again; and again they urged charms to be bought or found; one, sinless and inexpensive, a frog which, if tied in a bag round the neck of the sick and starved to death, gives its slowly departing strength to the sufferer, at least should be tried. There were many workers in magic among the people of the village. . . .

Mimosa knew where to turn for help—at a price. But she would not pay that price, so she was bombarded again by the ceaseless chatter of the women : “Return to thine own gods, and will not thy troubles cease?”

“Fear not, O thou fool-woman, the gods are merciful. Offer the appointed sacrifice, and all will yet be well.”

Succour came to our human Mimosa. . . . All four boys recovered. “By my God was their healing,” she said in speaking of it afterwards. “By Him alone it came, for none of the things I would have done for them was I at that time able to do.” And, moved by the love which cannot rest without giving, unconcerned by questions about how the Lord of all the universe could care to receive her trivial gifts, she sent part of her first earnings, by the hand of her little boys, to the church. 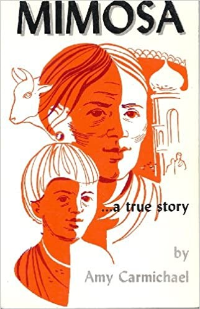 Believers exchange superstition for faith in Christ
Mimosa's four boys all fell ill when measles struck India. Mimosa chose to trust God alone, turning down all entreaties to abandon her faith and return to idol worship in a bid to save her children. Her faith was not in vain, as God stepped in to heal her children.