By replacing hate for one of his captors with love, Jake made a friend out of an enemy.

Following excerpt from 33% into Return Of The Raider by Donald M. Goldstein, Carol Aiko DeShazer Dixon

One day, an opportunity to demonstrate his faith appeared. Jake was being taken back to his cell by one of the guards after a short exercise period, and the guard started pushing him. “Hayaku! Hayaku!” (Hurry up! Hurry up!) the guard shouted as he slapped him on the back with his hand. When he came to the door of Jake’s cell, he held it open a little and gave him a final push through the doorway. Before he could get all the way in, he slammed the door and caught his foot. He held the door against his bare foot and kicked it with his hobnailed shoes. Jake pushed against the door to get his foot free, and then jumped aside. The pain in his foot was severe, and he thought some bones were broken.

As he sat on the stool in great pain, he felt as if God were testing him somehow. He felt anger and resentment toward the guard and thought, “Surely God doesn’t expect us to love the real mean ones in this world.” But then he remembered the words of Jesus in Matthew 5:44 who said, “Love your enemies, bless those who curse you, do good to those who hate you, and pray for those who spitefully use you and persecute you” (NKJV). Jake also remembered 1 Corinthians 13:4-8, the great love chapter, stating, “Love is patient, love is kind. It does not envy, it does not boast, it is not proud. It is not rude, it is not self-seeking, it is not easily angered, it keeps no record of wrongs. Love does not delight in evil but rejoices with truth. It always protects, always trusts, always hopes, always perseveres. Love never fails.”

The incident helped Jake to understand what it really means when Christians are called to love their enemy. At that moment, Jake decided to replace all the hatred in his heart with love. He also wanted to try this new approach on the guard. When that same guard came to Jake’s cell the following day, Jake bid him “Ohayoo gozaimasu” (Good morning). Jake chose not to curse or to hate, but rather to love. The guard looked confused and must have thought Jake had spent too much time in solitary confinement, but after many days of trying to be nice to the guard, the guard finally smiled and began to talk with Jake—as much as they could with Jakes’ poor Japanese language skills.115 The guard changed his attitude toward Jake and from that moment on he no longer shouted or treated Jake rudely. On one occasion, the guard slid a boiled sweet potato into Jake’s cell. This was a wonderful treat. Trying to comprehend the great transformation that took place within him and what was happening in his cell, Jake told Dr. Watson:

How easy it was to make a friend out of an enemy because I had just tried. God’s way will work if we try it out. Jesus was not an idealist whose ideals could not be realized. When He told us to love one another, He told us the best way to act, and it will work. His way will work out better than any other way which could be tried, but people and nations still try some other way to their own confusion.

Return Of The Raider 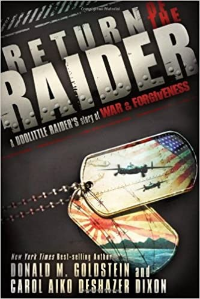